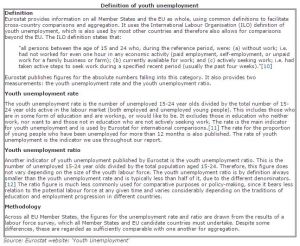 MITH 1: Nearly one in four young people in the EU is looking for work and can’t find it.

REALITY: As in the U.S., the unemployment rate counts the unemployed as a share of only those who are in the labor force. It thereby excludes 15- to 24-year-olds who are enrolled in school or in training programs and therefore not looking for work. According to the Organization for Economic Cooperation and Development, only 12.6 percent of EU residents aged 15-24 are neither working nor studying, and not all of those are looking for jobs.

A more realistic measure may be the “youth unemployment ratio” developed by EU statistics agency Eurostat. It looks at the entire population of 15- to 24-year-olds, and determines how many of them are looking for work but can’t find it. EU-wide, that figure last year was 9.7 percent, which is a problem but still far below the widely reported 23.2 percent youth unemployment rate.